E3 is always an interesting conference to attend. There’s so much to see and so much to do, but you’ve gotta be pretty picky to make time for everything. Unless you’re just really patient. More power to you if you waited in that 3 hr line to play Pokemon…TWICE.

When I go to E3, I always ask myself, is there anything specifically you’re willing to wait in the line to do/play? My answer this year? Not really. I would’ve loved to play Pokemon for the free swag, but THREE HOURS!? You gotta be kitten me. Once you’ve played one Pokemon, you’ve played them all. I did however, take the time to watch some of the game play:

Between the beauty of the graphics, and the BOTW influence, Sword and Shield are going to be the best in the franchise yet.  As you can see in the photos above, the display for the game was no joke. Game studios put a lot of hard work, time, and money to creating these epic displays for all attendees to enjoy, whether you have interest in playing the game or not. For instance, I don’t have too much interest in Monster Hunter personally, but THE DRAGON.

From riding Cloud’s FFVII motorcycle, to sitting in a Fortnite “Baller,” the photo opportunities were endless. If you’re feeling like a subjecting yourself to some major FOMO, I suggest checking out @e3expo on Instagram. Shit’s ridiculous. I was THERE and I still get major FOMO from the stuff I didn’t get to do! 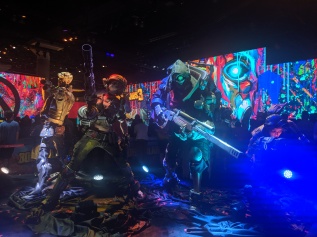 Overall, E3 is an experience that I truly hope every gamer gets to experience at least once in their lives. It’s always madness, but if you set your goals and do what you want to do, you can’t go wrong! I was only on the show floor for about six hours total, but I’d love to share some of my favorite E3 experiences with you:

Sakuna: Of Rice and Ruin

Not gonna lie here, I didn’t get to watch all the press conferences, so I don’t remember actually seeing this game announced. So when I saw an adorable fighter princess on display, I had to stop and see what it was all about. Sakuna: Of Rice and Ruin is a side-scrolling action game with crafting and farming elements. Now, I’ve never been fond of side-scrollers, but lemme tell ya. This combat feels SO. GOOD. It reminds me a lot of DMC: Devil May Cry battles. The game will be available on PS4 and Windows this winter!

Y’all know I have a SERIOUS infatuation with all things Indie, so it was a no brainer for me to stop by the Indie Cade booth. That’s where I stumbled upon the MASTERPIECE that is Sloppy Forgeries. This fast paced, two player, “art” game offers an intense amount of fun and competition. According to the staff running the game, they are working on developing an online system so you can play against friends from all over the world! Hopefully they’re able to pull it off! There is not an expected release date at this time, but make sure to check out PlayfulSystems on Twitter for updates!

Announcements That Got Me The Most Hyped

I have one word for you: MERMAIDS!? There’s so much going on here with this new Sims 4 expansion pack, but I’ll try to be brief. The island of Sulani offers the ability to become friends with dolphins, jet ski and snorkel across open water, and please the ancient spirits. Speaking of spirits, they might get a bit (or a lot) mad if you don’t take care of the island the way you’re supposed to! Become a Conversationalist or volunteer to clean up the beaches to make Sulani the paradise of your dreams 🌴 The Sims 4 Island Living launches on PC and Mac on June 21st, and on Xbox One and PS4 July 16th. Aloha!

THE WAIT IS OVER!!!!! Animal Crossing: New Horizons seems to be taking quite the inspiration from it’s mobile counterpart, Pocket Camp, while also retaining it’s traditional roots. If the hustle and bustle of modern life’s got you down, Tom Nook has a new business venture up his sleeve that he knows you’ll adore: the Nook Inc. Deserted Island Getaway Package! This new addition to the Animal Crossing series launches March 20, 2020, exclusively for the Nintendo Switch system.

Things I Hope To See Next Year

Check Out My Instagram For More Photos From E3

View all posts by andypandy2713

Hello everyone! My name is Andrea and I’m a pretty well rounded nerd. I love Anime and Games and Harry Potter, and well, you get the idea! This blog will offer gaming reviews, gaming news coverage, and esports galore! Follow me on social media to get notified when I make a new post!

Check me out on Twitch